What Keeps Me Up At Night

Why We Need Seats at the Table

Yes, given the choice, I'd choose to be Black again.

The Stories We Learn

What We're Up Against Part 1

On Monuments and Public Memorials Pt. 2

Towards Racial Justice with Resources

Towards Racial Justice with Resources

Pearls from Yale's 100 Years of Women in Medicine: Wrap of East Coast Visit

Smorgesbord!!! And oh, what a whirlwind!

It's a wrap: gratitudes and lessons from My Stroke of Luck

"How did you recover so well?"

"What were the first few months after your stroke like? And rehab?"

Linda Moore, (on my left with neon green cast), a Stanford classmate with whom I reconnected last year at our Reunion, attended my Drexel performance. Brought friends. (THANK YOU, Linda!) Afterwards, we went to dinner. It was an intimate, heartfelt evening. Felt as if we’d all known each other a long time. Nothing like rediscovering and recovering a lost friendship, and making new ones in the process. And another delicious meal. Has every city become a foodie capitol??

Below, with Dean Paula after performance, with audience members at reception (one needed a hug) and middle bottom row, with Yale Med Classmate Alan Penziner, M.D.. (Photos Brian Kantorek) 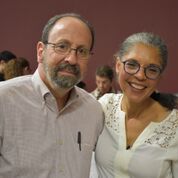 The next morning, my first television interview!! Paula Marantz Cohen, PhD, Dean of Pennoni Honors College, Drexel University, (below) hosts The Drexel InterView, an award winning half hour TV show, available on YouTube and 200 PBS stations across the country. Billie Jean King, Wendell Pierce, Norah Ephron and Nicholas Kristof are among those Paula has interviewed, and now ME!

After visiting with her for two days, the experience felt especially warm and intimate. But then again, think that’s her personal interview style. Under her questioning, I found myself getting more emotional than usual about all I experienced and overcame on the road to recovery. As we spoke, and I recalled experiences audience members have shared, I had several new insights, about the ways I have changed. Can’t wait to see the episode, which should be available by fall.

With Dean Cohen, on set, The Drexel InterView

Then on to New York City for 2 landmark reunions: my high school, Hunter College High School, a selective public school, which, at the time, was all girls, and my elementary and middle schools, Dalton School, a co-ed private school. (Dalton is sufficiently iconic that when Woody Allen shot his 1979 film, Manhattan, wherein, at age 42, he pursues a 17 year-old high school student, Margot Hemingway, her school was Dalton.)

Though I started in the 3 year old class, and Dalton continued through high school, by middle school, I found the environment stifling. Being one of 2 students of color in the grade of 40 (the other was Chinese- more on that below), on scholarship (meaning, a degree of economic exclusion in school and social activities), in a clique ridden environment left me with a deep sense of not belonging. After 8th grade, the boys all left for prep school, leaving the high school all girls. Though both my sisters stayed to graduate Dalton High School, when the boys left, so did I.

In my late teens, my father said that at the first 1st Grade Dalton Parent teacher conference, the teacher said, “Stop teaching Diane to read. That’s my job, not yours.”

“She taught herself last year,” my father responded. “We didn't help. And nothing can stop her.”

The teacher was very displeased, and continued to press the point.

“Why?” I asked, thinking less work for her.

“I think she didn’t want the smartest kid in the class to be a Negro.” (Fact: I don't know if I was the smartest, but I was the only one already reading.)

“Then why would you leave me in that school?”

“You would encounter racism everywhere. At Dalton, you would get the best education possible. And that’s what matters.”

Birthday party invitation lists were posted on a school bulletin board. But by middle school, when boy girl parties started in earnest, often, there were 3 people whose names never appeared on the lists: the two of us of color, and the overweight girl. At some point, her mother went to the school to object: include everyone, or extend the invitations by mail or telephone.

A week later, the next birthday invitation list was posted. This time, there were two lists for the birthday girl. The first, titled “A Party”, the second, exactly one week later, “B Party” . The A party excluded the same three. The B party included the entire class. Doubt either one of these would occur today, but that was then.

Interestingly, in a side conversation at the reunion, someone asked, "Why did you leave? How could you not have liked Dalton?"

I mentioned this incident.

“I don’t remember that,” she responded.

I stated the name of the girl who gave the first A/B party. She looked very thoughtful, said, “I remember going to two parties for her birthday.” Instantly her face flashed, her hand flew to her mouth. “Oh, my God!”

I felt I’d be better off at a public school, where there might be more minorities, might be a wider slice of the socio-economic and political spectrum of New York City, and less social competition.

And I was not wrong. Though the first year at Hunter partially repeated 8th grade in terms of academics, Hunter, with 120 gifted girls per grade was a much better fit. Ironically, out of the 120, there were only six (known at the time*) girls of color, exactly the same ratio as Dalton! One, Chinese, (how times change- today Asians are in a category of their own, and when we speak of people of color, we do not include Asians) was in the hundred girls admitted into the incoming seventh grade class. Our class, the only one incoming at 9th grade, accommodated girls transferring from K-8 parochial schools, though they also got me, and Ellen Katz, a Jewish girl. Ellen and I started with cachet: we were exotic- me a Dalton refugee, Ellen a non Catholic!

We sat in rows. The first row: Linda Alexander, Sharmaine Austin, Diane Barnes, Connie Beamon, Marlena Corcoran. The first four of us were Negroes (descriptor used at the time), the only Negroes (known*) in a grade of 120. Nancy Paniagua, also in our class, was the only Puerto Rican!

How could it happen that the only Negroes were in alphabetical order in the beginning of the class??

In order to be admitted to Hunter, one had to be recommended by one’s school and sit for an entrance examination. On the day of the exam, we were lined up in those same rows in alphabetical order, given the sealed examination booklet and a 3 x 5 card. After we wrote our names on the exam booklet, we were instructed to write our names and schools of origin on the card, a peculiar request, I thought; they have that information. After instructing us to tear open the seal and begin, the Proctor paused until we all began. Then, she, walked the rows, collecting the file cards. Despite the stakes of the timed exam, I watched her long enough to see her make a mark in the top right hand corner of each 3x5 phone card picked up from a girl of color. The other girls' cards went unmarked.

My best guess is they had a quota for us, and my year it four. Racism can be so virulent and insidious, no one thought enough of it to even consider randomizing. Of those who passed the examination, admit the first four Negro high scorers, those at the top of the alphabet, then fill the rest of the class. Through our high school years, the four of us understood that had happened. However until we openly discussed it at the reunion, it had never crossed anyone else’s mind, other than the last girl in the row who sat behind the four of us.

Hard to see what’s not on your radar.

At the HCHS School Wide Reunion, the most senior speakers were from Class of '43. One was an African American woman who went on to graduate from Meharry Medical School and still has an active license to practice medicine! (I retired mine 3 years ago.). Her talk tied our speaker, Barbara Scales's (student government President in our senior year), for most riveting and inspirational, as they each put the struggles of our school days in historical perspective.

But what shocked me: there were more than twice as many African Americans in class of '43 as in ours! AND, of that group, one third became physicians!

How have we lost so much ground?

Another shocker. Photographs of the school wide reunion, taken by an officially designated school photographer, included NO photo of either Class of '43 speaker, one of some of the speakers until '83, after school went co-ed. From class of '83 on, every single speaker was male, and there were several photos of each, none of whom were as articulate or memorable '43 or our year. Would I be wrong to guess the photographer was a male millennial? Maybe I'm a dinosaur, but an argument for all girls schools! (Admit, Lin-Maunel Miranda is one of our grads, but so are Ruby Dee, Ophelia DeVore, Elena Kagan, Maria Muldaur, Cynthia Ozick, Cynthia Nixon.)

Anyway, this was only the second time I attended either reunion. But I’m so glad I did. They were fun, lots of memories, reconnections and new perspectives on old lives. (And I saw one of my first crushes again!!! Just as handsome!)

Just what we need for the back 30.

*In 12th grade, when the colleges held a minority student recruitment drive, we discovered there were actually 5 of us. The other girl had been admitted at 7th grade. The exam proctor would not have recognized her as black, though as soon as we saw her there, instant, "Duh!" to us. She made eye contact- a pregnant look- and finished her high school career without ever otherwise acknowledging our common race.

What we do to survive.